The Eurozone crisis: An insider’s view from Cyprus and Max Watson’s views on this

On the 14th of October I attended a very moving conference commemorating Max Watson – an exceptional academic and scholar. The conference was called the tale of three cities and academics and other well know people attended and spoke about Max. (e.g. Klaus Regling, Managing Director of the European Stability Mechanism). It was clear that Max was an exceptional persons loved and admired by many.

In March 2013 I organised a conference in Oxford with the title of ‘The Eurozone crisis: An insider’s view from Cyprus’ with Dr Michael Sarris where Max was a discussant. He had a great interest in Cyprus and particular the Cypriot economy and you can see below his views on the bail-out that was applied in Cyprus. I repost below a report on the event.

On the 27th of January Dr Michael Sarris[2] gave a very lucid account into the functioning of the Eurogroup, as was experienced by the Cypriot delegation during the two meetings of March 2013. The first meeting resulted in a decision for a bail-in of Cypriot banks by all depositors and the second decision of bail-in from depositors with deposits of over 100,000 euro.

He highlighted that the current narrative is based on looking only at some of the symptoms of what is wrong with the European construction and not at the underlying problems. He believes that many Member States took seriously the benefits of the Eurozone and less seriously the obligations emanating from being a member.  However the Eurozone architectural construction had shortcomings that were not addressed, as for example, the lack of a mechanism to control imbalances, in both surplus and deficit countries. “When we realised that they were a lot of fires burning – we concentrated on rules to avoid new fires from developing, rather than to put out existing fires.”  Crisis mismanagement and a faulty decision making process are at the heart of the Eurozone’s continuing troubles.

He identified two main flaws in the decisions taken to address the euro-crisis:

He noted that in a similar situation with respect to Ireland, the option of a bail-in was rejected. Both of these decisions are testimony that “made-to-measure” decisions are taken for political reasons rather than the uniform application of the rules. In his assessment, from the first indications of the euro crisis until July 2012, progress was made in addressing the problem, but after July 2012 the euro crisis was caught up in the German elections and the progress was derailed. In fact “politics took over economics”. The path towards creating a banking union is a prime example of this process.

More specifically with respect to Cyprus, until 2008, it had problems which were disguised behind respectable growth rates, social stability and almost non existent unemployment. However, there were also serious problems, such as lack of competitiveness, but this was partly shielded by the large inflows of funds from Russians, there was big credit expansion and a real estate bubble. Everybody on the island was euphoric at the time.

Cyprus in 2007 was 1st with the highest primary budget surplus from all the Member States running at 5.5% of GDP. Following a spree of government spending, by 2009, Cyprus was in the 17th place. Consumption was encouraged rather than investment. By May 2011, Cyprus was shut out of the financial markets. A series of missed opportunities to ask for help from Brussels followed – including at the time of the Greek bail-out since Cypriot banks had 50% of their business in Greece and lost several billion euro overnight with that decision or following the massive explosion of the power station at Mari in July 2011.

By the time that Cyprus did ask for help in the summer of 2012 – this was refused. At that time, both the IMF and Germany were adamant, that they were not going to allow this since they believed that lending more money would make the debt unsustainable.

In February 2013, following the Presidential elections, the new government within days of being sworn-in tried to negotiate support. Two dramatic Eurogroup meetings followed in March 2013, during which a “staggering lack of collegiality” was demonstrated by the other Member States and during which despite the private discussions of sympathy no statements were made by any Finance Ministers for the defence of Cyprus. With the Eurogroup decisions, Cyprus found itself in a terrible situation and shock waves hitting not only Cyprus but markets throughout Europe. Undermining confidence in the banking system in Cyprus was a serious blunder with lasting consequences.

Cypriot economy is without a doubt going through a very difficult time but is has been weathering the storm better that was expected and already some positive indicators can be seen: Cyprus is keeping on track with the reforms identified by the Troika and the economic indicators are much better than those forecasted even though still in a difficult situation. Hope is also based on the prospects of Cyprus to be an energy exporter in the next years.

Max Watson[3] in his analysis focused on what he called the “staggering lack of collegiality” that was evident in what happened in Cyprus and that this is not “healthy” for the EU. He considers that three waves of mistakes were made: the surplus was left to erode sharply; they delayed action and took no measures when Russian loan came in 2011; and the Central Bank’s total lack of measures to counter the problems and particularly the real estate bubble.

Max analysed the mistakes of Cyprus, which in fact were not that different from mistakes made in Ireland or even the US. However, what was different was the scale of banking losses relative to GDP. When the IMF then decided to set a limit on the public debt ratio of 100% of GDP in the case of Cyprus – which in the case of Greece was set at 120% – this had dramatic implications for the kind of solution that could be envisaged for the island. With respect to lessons learned, there is no prior case where a bail-in has been applied to bank deposits in such a way, in an international rescue package – possibly except for the case of Costa Rica in 1986.

In his concluding remarks, Max said that the difficult question for the future is how far Cyprus constitutes a precedent. Clearer rules on bank resolution are now being put in place across the EU, and the taxing or haircutting of small deposits seems to be ruled out for the future. But there were also objections to the Cyprus ‘business model’ – apparently referring to the size of the banking system relative to GDP (not just to allegations of financial crime). Would this business model concern be a template for the future? Would it be applied to all countries alike? And how about the public debt limit being set as low as 100% of GDP: what does this imply for other future cases? These are very important issues, and they seem to remain unclear, which is troubling.

Michalis Sarris studied Economics at the London School of Economics and received his Doctorate in the United States.

In 1975, Michalis joined the World Bank. In the course of his career, his work covered a broad range of sectors in Africa, Latin America and East Asia.    His duties included the design of overall country strategies, advice on policy issues for economic and social development, the elaboration of programmes for structural reforms and the development of economic policy dialogue, between the Bank and the national authorities of countries seeking World Bank assistance. At the end of 2004, he retired from the World Bank as a Department Director.

In September 2005, the President of the Republic of Cyprus, appointed him as Minister of Finance, where he served until the change in government in March 2008. During his tenure, Cyprus prepared for and successfully introduced the Euro as its national currency.

Between 2008 and 2012, he served on company boards until March 2013 when he returned to the post of Finance Minister for a short period.

Max Watson is a Visiting Fellow at St Antony’s College and program director for the Political Economy of Financial Markets.

He also co-ordinates political economy work on South East Europe at the European Studies Centre. He was until recently a director of the Central Bank of Ireland, and research director at the consultancy John Howell & Co Ltd.

His career began in the Bank of England, where he was a manager in banking supervision and an adviser on international affairs. He then worked as chief of the IMF’s International Capital Markets Division, later becoming a Deputy Director of the Fund.

He spent five years at the European Commission, where he was adviser on financial stability issues to the Director-General of Economic and Financial Affairs.

Max Watson is also a fellow of Wolfson College, Oxford, and a Trustee of the Foundation for Law, Justice and Society.

The Eurozone crisis: An insider’s view from Cyprus

In association with the PEFM

[1] See poster for the lecture attached below 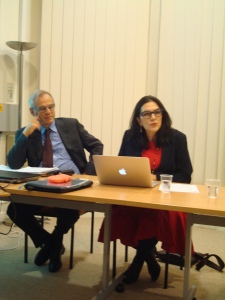 2 thoughts on “The Eurozone crisis: An insider’s view from Cyprus and Max Watson’s views on this”